This is how my life changed forever. The day I decided to write a children’s book series called the X-tails.

My first real passion was riding my BMX bike with the neighbourhood kids in Pitt Meadows, British Columbia.  All day long, we hung out at the dirt jumps, pretending we were the next BMX pros.  Ripped and dirty jeans were a daily occurrence back then, much to the dismay of my father!  We also owned skateboards at that time, but our knees were used more than our feet to get around.

It was when I moved to Tsawwassen, British Columbia in grade 5 that I learned the true meaning of skateboarding.  It was a humbling lesson.  Tsawwassen was different from Pitt Meadows.  This experience could be compared to the book “The Outsiders.”  In Pitt Meadows, I had been a member of the Greasers. 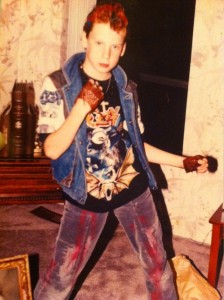 Now in Tsawwassen, I had no choice but to join the Soc’s.  I got a haircut and no longer knee-boarded, but pushed my skateboard like a skateboarder should.  I was accepted by the local skaters and my BMX bike began to collect dust.  I quickly learned that skateboarding was not a hobby; it was a lifestyle and obsession!  All of my spare time was spent on my board.  There were no skateboard parks nearby back then, only the mean streets of Tsawwassen- hah.  It didn’t matter though; we were happy grinding painted curbs and ollie’ing cracks in the sidewalks.  It didn’t take long before ollies progressed into kickflips and heelflips.

It was in grade 9 that I bought a snowboard and headed up to Grouse Mountain f or my first day of snowboarding.  Funny thing, I had never even seen someone snowboard in real life or on TV before.  The closest I had come to snowboarding was riding an old skateboard deck on the snowy hills of a local golf course.  That day at Grouse Mountain, I had no idea that the metal edges on a snowboard had a purpose.  I just straight-lined it right off the bat, not realizing that snowboarding was a lot different from skateboarding.  Surprisingly, I made it fairly far down the run.  I somehow learned to turn that day and even went for a few jumps.  Now, I was not only obsessed with skateboarding, but snowboarding had opened up a whole new world!

It was later on in high school that my time skateboarding slowed down and I turned to mountain biking.  What a rush!  It was a new challenge.  Mountain biking was no longer about pedaling on flat trails, it was all about speed, hitting jumps, and balancing across high, skinny wooden structures.  The mountain biking world was quickly evolving and it was a lot of fun to be a part of that.  Looking back, I realize it was these sports- BMX, skateboard 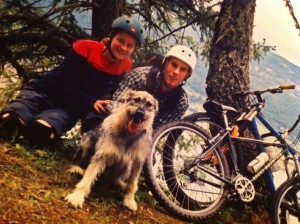 ing, and mountain biking that kept me out of trouble when I was a young kid.

After graduating high school, I still wasn’t ready to grow up.  My friends and I moved to Mt.Baker for the winter.  We were snowboard bums, plain and simple.  What a life!  After spending a winter at Mt. Baker, I was finally ready to grow up; or so I thought.  I moved to Prince George to go to school at the University of Northern British Columbia.  Unbeknownst to me, Prince George would become my permanent stomping grounds. 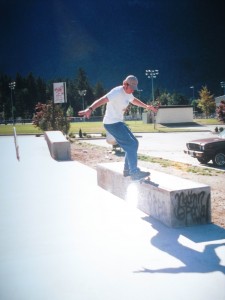 During my first year at University, three amazing things happened to me.  First, I fell in love with skateboarding again at the Prince George indoor skate park.  Oh, how much fun it was to skateboard again.  Why did I ever stop?  The second great thing to happen to me was falling in love with a small ski hill called Powder King.  You see, Powder King is a little secret that is nestled in the Rocky Mountains of northern British Columbia.  Jumps, tree riding, great people, and did I mention powder- lots and lots of powder!  Again, it was unknown to me that Powder King was about to become my second home.  The third amazing thing to happen to me that year was falling in love with a girl named, Corrie.  Being young, it was once again unknown to me that Corrie would one day become my wife and mother of our two children.   After graduating University with a degree in Forestry, I was finally ready to grow up, right?  Wrong! 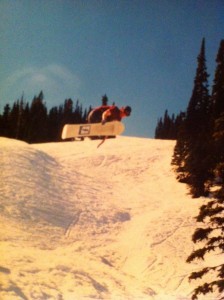 Corrie and I moved to Red Mountain in southern British Columbia.  We were both officially snowboard bums.  The fun didn’t end there.  Our next winter was spent at Fernie Mountain Resort.  After those two seasons of ski bumming, we were finally ready to grow up…..not!  We bought a house and became the parents of three big, furry dogs.  Shortly after that, we got married.  My skateboard was once again collecting dust, but we were loving life on our snowboards and our mountain bikes!

A few years later, we lucked out and moved into a cozy little log house on a small lake.  Again, I was oblivious to the fact that this house was one day going to be the perfect setting for my writing.  I was now working full-time in forestry, and we still managed to snowboard fifty days at Powder King each winter.  Life was good!  For years now, we had been dragging a tiny holiday trailer back and forth to Powder King on the weekends.  It was a lot of work dragging that trailer around.  Out of the blue one day, an opportunity came up to buy a cabin.  Oh, did I say “cabin?”  Sorry, what I meant to say was that we bought a camperized school bus with a built-on addition!  Compared to the eight foot holiday trailer we crammed into with our three big dogs, our new cabin felt like a mansion.  This became our second home and we immediately painted a red sign on the front that read “The Fielding Shred Shack.”  Now, our Shred Shack was not the fanciest cabin in the world, but the wood stove kept it warm, and the gas powered generator kept it bright…..or a bit better than dim. 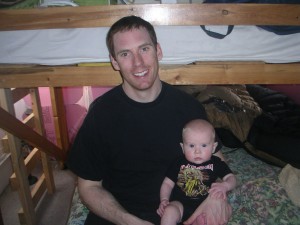 As my kids got older, I soon realized how much fun it was to take them snowboarding, skateboarding, and biking.  What better way to spend time as a family?

Where am I going with all of this?  Well, you see, it was during this time in my life, about two years ago, that everything clicked.  It just so happened that I learned something about myself.  It seemed like I was pretty good at telling stories; maybe, I was a little too good because Colton wouldn’t stop asking for stories when we drove in the truck.  Did I mention that Powder King is a two-hour drive one way?  That means a lot of time for stories.  Naturally, my stories were about the sports I loved- skateboarding, snowboarding, biking, surfing, and all of the other sports I admired.  What was unique about my stories were the characters doing these sports.  The characters were animals of course, and I did my best to make them as fun and cool as possible.  I named them the X-tails, which I knew was a perfect fit!  Corrie was the first one to raise the idea of writing these stories down.  I immediately dismissed the thought, but her idea stuck with me.  I had a flashback of grade eight when my teacher asked me to read a story in front of the class.  It wasn’t just any story, it was a story I had written.  I was embarrassed!  My friends were in the class.  But, I did it!  It was a sad story that I had written about raccoons.  I can’t really remember it to this day, but my teacher gave me full marks and said it was the first time she had ever cried while reading one of her student’s work.  Hmmm, maybe I can write? 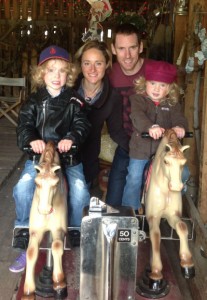 Over the last year, I have written six stories about the X-tails.  It is our cozy log home and the Fielding Shred Shack where I draw most of my inspiration.  I often read my stories to the neighbourhood kids at Powder King.  Whenever possible, I try to share my writing with others, as I enjoy seeing a child light up when they listen to the X-tails.  I am passionate about writing these stories because I can portray these sports in a way that kids and parents of all backgrounds will love, while still being respected by those that do the sports firsthand.  It has been a long journey to publish my first book, and it is a journey that I am looking forward to sharing with you…